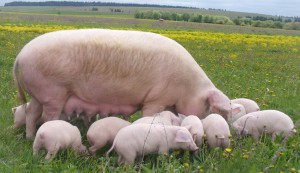 Introduced species of pigs in the literature is often found as “UCB-1”, and the full name sounds like “Ukrainian Large White” pigs breed. After creating the main species at breeding plants have begun the process of creating intra-breed type of representatives of Ukrainian large white pupils. There was this removal in special breeding plants and territories about ten subsidiaries farms. The leading breeding plants concerned agencies such as: “Steppe”, “Chutov” (located about Poltava region), “Big Burimka” (placing on Cherkassy region territory), “Bobrovitskiy” (Chernihiv region), “Ukraine” (Vinnytsia region ). In the period from the beginning of the existence of the species, and until 1973, in the process of inter-breeding of pedigree breeding methods were used exclusively. This changed around 1974, when the exchange of different genetic breeding reserves became intensely distributed and used. In fact, the transfer of breeding material highest role played by a wild boar. A few years later after long and multiple studies, the UCB-1 has been recognized as a separate species. Already in 1984, pupils had the unique title.

Consider some exterior signs represented species. So pigs are characterized by a massive relief and constitution. Adult males have about 320-330 kg, mature female representative, in turn, has approximately 240-250 kilograms of live weight.

Sows represented varieties have good mothering ability. In one litter mother pig gives life from ten to thirteen piglets. Feeding babies is also a high-level performance of the sow milk up to 50-80 kg.

Fattening newborn babies can reach, at the age of 60-90 days (two to three months), from 18 to 22 kg. control fattening results show that the average daily weight gain waver in areas 700 grams. Grow to a six-month of age, piglets weigh 90-110 kg. The required amount of food per kilogram live weight gain – 3.5-4.5 feed units.