GeoMedia.TOP / Livestock / Rabbit breeding / How to skin a rabbit correctly 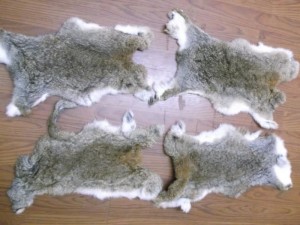 As well, on their own, with their own hands to skin the rabbit, step by step guide with instructions, photos. Dressing pelts

Experienced breeders know how to skin a rabbit and treat skin properly. Those who do not know the detailed points and is dedicated to the following information.

When an animal is killed and his blood does not flow, put the carcass on its back, tightly clutching fingers, swipe along the abdomen several times, this manipulation allows you to remove all the liquid from the bladder, if you do not make a right, you risk to spoil the meat.

Shoot with rabbit skins in two ways, the first time, an incision is made along the belly, but for the second, remove the skin of a tube or as a different way to call – stocking.

The first method of manufacturing a rabbit skins is a labor-intensive process. The second way is the fact that the carcass suspended by its hind foot, near the hock making incisions with a knife and cut them connect the inner side of the legs, and through the anus, as if tearing sandpaper. Of all the vertebrae of the tail is removed, but more often simply cut off. Hands, helping himself with a knife, remove the peel down to the head, separated from the fat and subcutaneous film. When they reached the front paws, they cut to the wrist and release. The final point for the complete removal of the skins of the rabbit is circumcised ear cartilage base, the skin around the eyes, lips, nose.

The first, more complicated option is that an incision along the abdomen is performed, starting with the lower lip, sinking along the neck through the stomach to the anus. To remove a skin begins with the hind legs, then move to the stomach, sides, spine, front legs, neck and head. If the breeder is not very confidently wielding a knife, there is a good chance to get breaks skins, then they will need to sew.

When the skin is removed from the carcass, after an hour, it is degreased and dried. Finished skins can not be put in one pile, or may be in addition to warming pollution happen as a result – will begin to fall out hair. After such a skin the rabbit is considered to be completely spoiled.