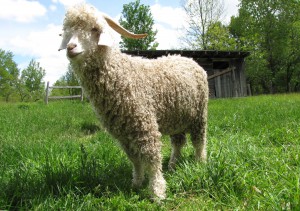 Individuals Angora goats belong to the most types of small goats. But in spite of this breed is highly appreciated for the quality down. Most individuals have a snow-white coat color, but can also be found with a black or gray color.

Angora goats have horns: in males, they are large and used for their own protection and as an object of pride and strength in small goat horns. Goat horns have a helical shape horn, which is very different from the straight, slightly bent horn of a goat. Today, experts are working on a new type of Angora goats, which individuals would have had no horn.

The body of the animal is not great, but the dense, muscular. The head has a long shape profile hooked. Chest underdeveloped neck shortened, thin. The eyes are large, brilliant; the ears are quite long, so hang down. On the back there are no bends. The feet are small, strong with a good fit, strong hooves light color. The coat is very thick, thin and long, it occurs 2 varieties: curly and wavy, curly so-called (or mohair) wool is different from a simple wavy mainly long, which is 25-35 cm Angora goat wool type Mahora look incredibly beautiful.: hair shiny, uniform hanging almost to the ground. This wool is ideal for the manufacture of high-quality wool products as easily recycled.

In our time, the breed has a good demand and popular in many countries around the world, but is considered to be the birthplace of Turkey. The name of the breed is associated with the place of its origin, namely the capital, the fact is that once the name sounded like Angora, not Ankara. The first goat called Angora became known in Europe as early as the mid-16th century, when the Turkish sultan decided to refer to the Pope as a gift of a pair of Angora goats. He was taken to Constantinople animals Ogier Gielen de Byubek.

In the 19th century Angora goats were first imported to other continents, the first of which was Africa, and 10 years later – America. In Africa, the goats quickly spread across the area, joined the domestic life of the local people and become a good option for making money. The most valuable are the goats, in which the wool treated to Mahora type that in Arabic means “chosen.” Indeed, the wool of goats was the most valuable, because the demand for it high, and thus the price. In America, to the greatest extent Angora goats were bred in the United States and in Texas divorce these animals formed a separate branch, which employs the majority of residents.

In addition to the valuable wool Angora goats can be used for cleaning overgrown areas. They are unpretentious, so quickly and efficiently relieve any overgrown area of ​​shrubs, young trees and high grass. This is a double benefit, as the goat and eat and the area clean.

The breed is very friendly, so you may safely graze with the other livestock. In small households, farmers usually keep no more than 30 Angora goats. If a specialized institution or a large ranch, and then you can keep more than two hundred pieces. The most suitable terrain – mountain, but you can also graze on the plains. Angora goats eat almost any vegetation, so there are comfortable in all conditions. The most delicious and nutritious food be considered as oak leaves and acorns. Spring is with great pleasure goats gnaw young shoots. You should know that some plants can be dangerous for Angora goats, such as the prickly pear, which does not need much water, so during dry periods it very much. When other green plants wither in the heat, goats can eat prickly pears in a food that adversely affects health: in the mouth may be sore from the rough plants.

It is known that diets affects many goat productive indices, and the main measure of the quality of wool. If the animal is fed mostly hay, the wool will be less fat, and accordingly – and easier; if the diet Buda include a lot of greenery, the hair becomes heavy and greasy. The most suitable option is considered to be crushed grain, wool from it not to get fat, but slightly coarsens.

Ideally Angora goats need to graze on the mountain slopes, where they are looking for their own food, but if this is not possible, it is possible to add to the diet of alfalfa, corn and a special diet rich in protein.

Okoth Angora goats has its own specificity: goat souse only if it will not bring her harm that is normally make and give birth to a kid can only be well-fed goat. If the female weight is not high enough, its body begins to reject the fetus, thereby obtaining a miscarriage. What happens then is, if the owner is unfair and does not follow the diet of the animal. If goats properly courted, it is quite possible that the Angora goat will immediately two kids. To goats grow up healthy and not sick, you need to be fed mother. Rows feeding should last up to six months, during which time goats grow stronger, gain strength and get ready for a full life in the herd. Farmers who weaned kids from goats before making a mistake, because the young in most cases and remain for life weak and small.

The most valuable wool Angora goats – mohair, wool monthly increases in length by 2.5 cm, and a year can get up to 6 kg shearing. In warm countries shearing productive due to the fact that the shearing is carried out there 2 times a year, and in countries where the climate is cold – only 1 time. This is due to the fact that immediately after shearing Angora goat begins to be vulnerable to the cold and the wind, so it is impossible to carry out a hairstyle winter in any case. Even if the vows made in the spring or autumn, and the street is wet or cold weather, the animals better for a while to keep in the barn. The more years of angora goats, the greater the performance start to decline by shearing wool. Old animals are slaughtered for meat and further processing.

Nowadays Angora goats can be found in any part of the world, almost all continents know this breed of goats. The largest centers for growing goats for mohair production are the US, Australia, Turkey, Argentina.