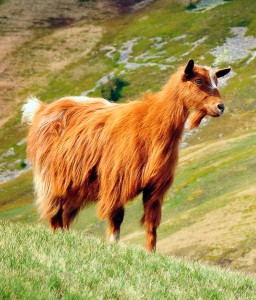 Meet the Carpathian goat breed can be on the south or east in Europe, there is, however, also possible to hear other names for the breed as “karpatska» (karpacka) or “karpatina» (carpatina). Performance of such goat considered sufficiently high in meat, milk and in a direction so popularity ratings than breeding species. Check the animal can be very simple, apparently they have long hair and twisted, with rare horns.

In the world there are many different colors of wool cover Carpathian goats. It is known that the largest number of color variations lives in Romania. This is not strange, because in this country, and were bred Carpathian representatives. The second animal habitats – is Poland, but in this country does not have the same number of goats as their homeland, and there are goats often only in white color. Despite the launch area, a long time ago a type already met in other places. In fact, the first representative of the Carpathian ranges found in the 19th century, in the territories of the Carpathian Mountains in Poland. After many years, the breed began to disappear and the time of modern agriculture, the breed does not actually exist at all, so other varieties of selection of projects to meet the goats were not able to be produced. So, it took several years and a small group of representatives from the Carpathian species found in Poland, the action took place in 2005. Following the discovery, the animals immediately taken to NRIAH (National Research Institute of Animal Husbandry), where they have been thoroughly inspected and studied by scientists. So, this tiny flock newly resumed the history of the whole breed and gave birth to a new generation of Carpathian breed.

Exterior Features varieties: medium size, relief body; elegant head, with a straight profile and wide udders; head of the smooth transition to a long neck; carefully placed thin horns, in the opposite direction; on the face are a medium-sized beard, sufficiently long and rather narrow ears.

The fact that representatives of the Carpathian goats survived, it was a great shock to many. It was not easy to survive in the harsh conditions of the Carpathian mountain. To breed it gave certain characteristics, and scientists have looked very different to the species. Now Carpathian goats are among the most hardy, they can get used to anything, even the most adverse conditions, but with great ease and kept us in the familiar agriculture. Pets quite peaceful and minimally invasive, which makes them ideal for a lot of research and agroturizmaticheskih projects.

Named species, of course, in honor of the mountain, and in which they have found.