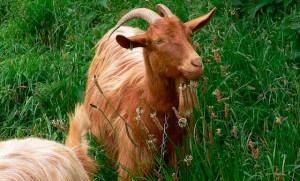 English breed of goats that is considered native. Officially breed Golden Guernsey goats breed showed up in the last century in the United Kingdom. There is a theory according to which scientists are inclined that this breed of goats are the remains of 2000 years ago, which found in the tombs. It is believed that they looked up to as the modern. As for the ancestors of the Golden Guernsey goats, then there are more confident and experts agree that the progenitors are Oberhazli and Syrian goat. Thanks to its beautiful and unusual color breed gathered around him at this cozy, which even created a special club Golden Guernsey.

Grown Golden goat primarily as a dairy breed, which further confirms the British Society of Goats. This goat is very beneficial to keep the house, because it is small, unpretentious food and has a good productive performance. On the day of the female can produce up to 4 liters of milk fat content of about 4% of the protein content of 2.8%. Thus, for the lactation period can be obtained on average 700 liters.

Golden Guernsey goat has a unique coat noble gold color, which is so highly valued among society kozovodov. In fact, coat color, and can be almost white with a light silvery haze or smoky-blue color with a bronze sheen, goats with sandy golden hair is not too much. wool length may be different, it does not play a big difference. Golden Guernsey goats are used for crossing with other breeds of goats, to give them a beautiful appearance.

There is another kind of Guernsey goat, which can be confused with gold at first glance – British Guernsey. The main difference is that the Golden Guernsey smaller and lightweight due to the thin bones. This is one of the easiest British dairy breeds. Another feature is the most hornless goats, although sometimes you can meet the animals with small horns. Character Guernsey goats are very quiet, the animals quickly become accustomed to the owner and not aggressive.

Golden Guernsey goats have become a national symbol of the island of Guernsey, where I came from animals. Thanks to goats with a beautiful coat color of this place knew the whole world.