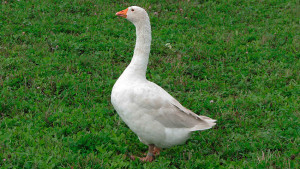 Arzamas goose gets its name from the city where emerged. Geese were bred to overflowing banks of the Oka and are one type of Tula geese.

Arzamasskaya breed geese actively I. Abozin described as a large, low geese with a long neck and a strong sheepskin. The beak is longer and thinner than that of Tula. Most members of Arzamas rocks painted white, but can also be found and gray geese. The breed is often mixed with Chinese and Russian birds that affected her thoroughbred unlike Tula breed.

For dozens of years of existence of the breed, permanently selected the best of the best to improve the quality of geese. Thus was formed a good meat, precocious breed.

Arzamas goose has a long history. The first memories date back to the reign of Catherine II, for which organized as entertainment crow contest, which took part Arzamas geese breed. Since that time, the breed spread to large areas, and the population increased. During the Second World War the breed has suffered losses, and livestock has dropped significantly. In the postwar years began hatching and improvement of the breed.

The tradition to use the Arzamas geese preserved to this day in the fighting, but to a lesser extent. Today massively grown geese for meat production, which is growing quickly and has a pleasant taste. Most geese have white plumage and gray geese because of the color of feathers bird also has a gray tint. Externally Arzamas goose like a swan: a large body, long and thin neck, blue eyes.