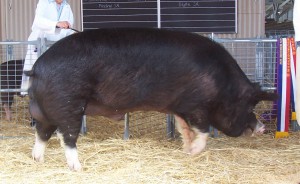 For its own characteristics, breed Berkshire pigs has meat-greasy type of productivity. Exterior breed data presented indicate a good and strong physique, intense earliness, high feeding quality, and high-quality product of animals. Berkshire breed representatives are among the most precocious varieties, the young pigs fed initially for tallow and meat products. Practically proved that tallow productivity comes to 125-145 kg, and meat – to 90-105 kg. Adult males of this species has a weight of about 215-255 kg, in turn, the female weighs about 175-225 kg. Little pigs (although external data “small” is difficult to call them) at the age of six or seven months weighs about 95-105 kg. Average daily gain of live weight of about 660-680 grams. It is known that for every kilogram of body weight should leave about 4 feed measurements. For once mother pig can result from 7 to 10 piglets that, compared with other species, is not high. However, despite the fact that fertility is different specific characteristics, Berkshire breed productivity is high among many other pig breeds. Statistics about the slaughter output shows a high bar profits. The very same slaughter yield is about 88%. Often Berkshire representatives kill very young, the result is excellent and high-quality meat with a delicate flavor descriptions.

For the first time pigs were seen in areas of England, one of the most popular and richest counties – Berkshire. Pork representatives that lived at that time, had a common external data had a rough skin and were quite large. Passed year, I one group of breeders decided to start improving represented species. In the initial stages of research, Berkshire pigs crossed with the Chinese breed. The next step was to breed breeds only in the circle of representatives of Berkshire. The process was not monotonous, like the above-described kind of animal is constantly changing with each generation. In addition to ceases before us now so, what are the pigs, the breed was nearly fifty years. While major changes were successfully completed in the late eighteenth – early nineteenth century, our modern noun improvements or deterioration was not, though, and it’s been quite a long time.

So, consider the exterior characteristics of the breed represented. Berkshire variations inherent in similar data: a small, fairly light head; straight, small ears; feels stiff and thin bristles; the trunk is large, dense, deep, except sizes also differ in length; Animal dense constitution, the main task – High-quality productivity. About to feed pigs need to be careful. The fact that the presented variation is prone to obesity, the daily diet therefore must be correctly folded, certain requirements on all animals. Pigs breed Berkshire have a beautiful black suit, but the main difference is the little white specks in the field of attendants, a small tail and on the muzzle end.

In fact, many would agree with the view that has provided a kind of one of the most harmonious physique. Pigs large, convex chest; broad, deep and straight back; small of the back is different in that it is very straight and wide; round, beautiful hips; proportional to the body, a large rump; well-developed area of ​​hams that extend to the mobile joint (joint with this pig can jump). Popular varieties of representatives not only because of their own good productivity, as well as through what for them can be easily maintained. Animals do not need a certain food, conditions of detention. Behave fairly quiet, can easily carry in the open air pastures, moreover, pets need to walk in the fresh air.

Although the breed Berkshire pigs and was not displayed on the territories of England, first noticed and widespread species was there. Soon the pig data made great adjustments in pig production in our country. With the help of the form submitted to create new varieties of pork. These include: North Caucasian breed Lievens pigs Mirgorod Kamerovsky and swine species, Ukrainian steppe pock-marked and kalikinskaya pig, as well as the Belarusian black mottled variety. Now breeders use all the qualities that are inherent in Berkshire, it is rare. Basically, with the help of provided varieties are creating new generations by crossing a large white pigs. It is proved that this limited use is of great benefit for new generations of pigs. New born offspring with improved fertility, high-quality safety and good ripening. A breed Berkshire pigs are used for quality beef fattening.

Breeding varieties of the above raids, as well as any other breed, specific pros and cons. In this article we consider the basic characteristics. So, to the positive qualities of animals including high maturity, large and strong body, intense growth, good performance of slaughter yield (about 80%). Also, pigs are recommended for those who are not able to constantly take care of pets, as berkshkirskie representatives do not need to be tightened inspection, a special diet and conditions of detention. At first glance, it seems that the rock contain beneficial enough, but, unfortunately, and these animals have, as they say, and the other side of the coin. Differ pets outside drawback, they iskoobraznye end that prevents them from moving quickly. The big drawback is that the variety of low fertility, this is the reason for the purchase of representatives of the breed difficult and expensive, and when breeding often pigs used only for mating, although Berkshire breed of pig has other good indicators (such as meat, greasy etc.).