GeoMedia.TOP / House and Manor / General tips / Building a house from a bar 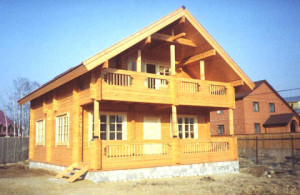 Building a house from a bar in the country. How to build a house in the country of timber. Schemes, plans, drawings of wooden houses

What only do not build country houses today. Bricks, blocks, panels … but still has to sire the most popular building material is wood.
PP regional scale

Once, 10 years ago, we bought land in a village house with a small shield overlaid on the outside with bricks. The years went by, the family grew, and as a result there was a question about the construction of the new family nest.

Make all wanted to correct and qualitatively (the built-still for yourself !!), so before the start shoveled a mountain of literature, have traveled a lot of construction companies. And all winter with love emerges future building plan – with a common living room, several bedrooms and terraces, located in accordance with the parties light.

For the first time down to earth we let down the spring in advance. I came back to reverently laid before the district architect drawings and paintings and heard a categorical “Do not go!”. It turned out to design a new home can only be licensed architectural institutes, neither more nor less, and nothing will change on how you want to build a small panel house 5×5 meters, or three-story mansion. Most interestingly, these organizations are ready and assure your drawing by giving him his own, only here will take the same amount, if designed the house themselves for these services. Frankly, not everyone can afford it.

As a result, the district architect suggested to choose the version presented in a set of “standard approved over” projects provided to citizens free of charge (and how to say thank you). So I was the proud owner of a set of documents for the construction of houses of timber size 8h10,5 meters. However, it had yet to run, getting a building permit from the fire, sanitary and epidemiological stations, and even the neighbors, but after an architectural fiasco it was already the beginning.

The foundation for the home from a bar

Construction of timber houses were, of course, making a solid foundation for the home from a bar. Long they argued, but still decided not to pour concrete to a depth of 1.5 meters, and establish a timbering in height of 50 cm on the compacted sand cushion. In this way, the main thing – remember that the foundation of the house should be enough to lay the reinforcement, and it should not be torn on the corner portions of the foundation. Then, for the strength you can not worry about (our foundation for the fifth year, he defended and snowless winter, and the last two seasons with the anomalous frosts).

Reinforcement brought to order. But, as usual, it was not enough – enough exactly to the foundation under the wall (external and one in the middle of the house – for load-bearing wall). But at the base of the stove went all the metal debris from the site – and the old bike and Brigandine sagging bed, and even on a truck axle. Now, our foundation furnace can be used in combat as the strengthening of anti – for what it is not broke! By the way, the foundation under the stove or fireplace in any case can not fill a monolith with wall, as in the spring the ground around the perimeter of the house and under the stove got frozen unevenly, respectively, and “walk” the concrete sections in different ways, breaking each other.

Slimming wall for home from a bar

Two weeks later, after pouring the formwork was removed – the base is ready! On the plot began to deliver a six-meter timber from a nearby sawmill: 100×200 – for sexual lag; 150×150 – for load-bearing walls and 50×150 – for roof beams. There we waited for another disappointment. Bruce was so uneven that one log may differ from each other by 40 mm!

What to do? Back material is already not send. I had to go to the trick – through all the logs to the bottom put a thick bar. But the upper crowns our walls significantly “lose weight” in thickness.

I note that the free projects, issued by the Administration, are far from ideal. This was in our case. The project Floor joists should be placed at the meter distance from each other. In fact, in this case, the floor will be considerably “walk”, so the optimal distance -. 70 cm We also chose not to make a big balcony on the entire front side of house, painted in the project, replacing it with a terrace, smaller in size. It proceeded from the fact that the projects are part of the living room directly under the balcony. But the climate in our capricious, the rain, the snow – in this case to protect the ceiling from leaks? Increased and the height of the roof, which was originally a rather flat. But in this case we would have lost a lot of usable space on the second floor. And with an increase in the rafters just a meter won almost 15 extra square meters. So before you blindly follow the project, think that all you are satisfied with it.

According to the project the roof rafters house overlapped 50 mm insulation material. However, talking to neighbors, we realized that such a thickness is not enough for our parts. Warming made a three-layer, 150 mm, with the use of steam and damp-proofing. To do this, from scraps of boards left over from the building, between the rafters amassed black ceiling, on which, and put a heater. On top of the roof covered with roofing material, and the following year was put metal roofing. Get Durable, warm and safe.

Next – it’s simple. Windows put plastic, easy to care for them. On the floor lay a decking thickness of 40 mm. Conducted electricity, we put convectors, hung doors. However, until the end of construction is far: a place in the oven and yawning while on the floor a huge open mouth black, not mounted water supply, not trimmed walls. But we do not lose heart, feeling comfortable in such conditions. The house, built with his own hands – special house, home, like a family member. And I think in a few years we will be able to note the new home for all the rules and invited to visit friends.

Tags: are building a one-storey affordable house from a bar cheap, winter, build a wooden house with his own hands, building summer houses of timber.