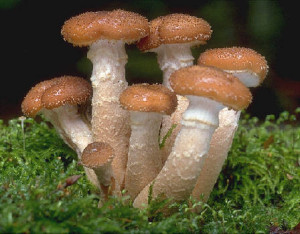 Honey mushrooms include 34 species of fungi, but only 22 species are described in detail and studied. And as you know, the average mushroom usually collect only certain types, such as: honey agaric flight, mushroom enokitake, autumn mushrooms. And now we will talk in detail about each of these fungi.

Winter mushrooms photo and description, our website is already described in detail, follow the link and read the informative article. 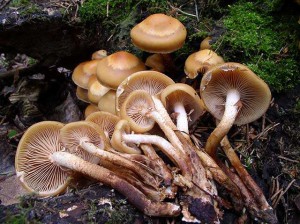 Mushroom honey agaric summer it is quite a popular edible mushroom in the deciduous forests.

As a rule, it can be easily found in the woods during the period from late April to early November.

He loves to spread huge groups, preferably, on the old, dead tree stumps or fallen trees.

Armillaria summer hat is not very big in diameter can reach 5-7 cm. The stem reaches a height of about 8 cm. It feels very rough not smooth. 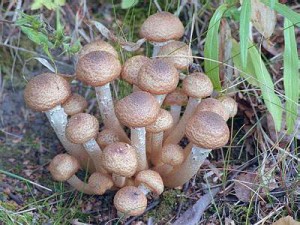 Armillaria mellea is a kind of forest parasite. Autumn honey agaric and parasite grows to more than 250 different kinds of trees, forest and non-forest, and there are times when he grew up on potatoes, such cases. Meet it can only in large groups, sometimes – huge! If you ask where there are autumn mushrooms, the answer is obvious – in the woods, and usually in the woods where there is more moisture. A need to look at the stumps of birch, alder and other forest trees. Time to find pripadaet tentatively the end of August and before the first frost. Hat autumn Armillaria can reach a diameter of large size, about 15-18 cm. Young species of mushrooms have a convex shape of the cap, and over time it becomes a flat shape. Color can vary from slightly more olive to brown. The foot as a hat, too big. Sometimes it reaches a size of 10 centimeters.