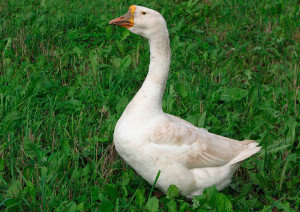 White Chinese geese breed of the same name with the place of origin. In ancient China, the locals have tamed wild goose domesticated it and for the acquisition of new and improved qualities brought him to the Indian and Grey Goose. Improved breed has spread to other regions: Siberia, Japan. In these parts, and the breed became known as Chinese white geese, and later they began to actively deliver to Russia and European countries. Despite the fact that in these countries White Chinese geese are not native species, they are very common and are very popular among the poultry farmers. This is one of the most common breed in the entire post-Soviet space.

Externally White Chinese geese are very similar to swans, just a little smaller. A medium-sized bird with a beautiful long neck and knobs on the beak, which passes on the forehead. Color snow-white, in contrast to other very similar species – Grey Chinese geese. Beak and legs bright orange.

External construction of the body is also identical with the Grey Chinese geese. And those and others do not whimsical in food and habitat. High level of adaptability, so it’s good to take root in any conditions. Preservation of fertility and also have a fairly good performance.

The only figure that is important – is weight. White Chinese geese are easy type of geese, so their mass is small: an adult goose can reach 5.5 kg, and a goose – 4 kg. Until two months clumsy goslings gaining about 2-3 kg. Goose ripe for mating and egg-laying as early as 9 months of age. Goose eggs hatch within 6 months, it begins around the month of December. According to the product of eggs practically have no equal: the young goose egg production for the period can bring up to 60 eggs, weight of 150 grams were also registered a record performance – 100 eggs for the egg-laying period. Fertility of the egg becomes about 75%, from which hatch about 80% of goslings. Little goslings have a high level of security, which becomes about 98-100%. Highly appreciated meat quality White Chinese geese, which are of good quality and taste.

Rather disadvantage than advantage is an activity that often goes into aggressive mode.

Today, white Chinese geese are most common in the former Soviet space and is actively used for the creation and improvement of new breeds. It is known that Chinese White were the progenitors of such well-known at this time species like Holmogorskoj, Pereyaslavskaya, Kuban and geese breed Linda. These rocks also acquired a good egg production, the safety of young and rapid weight gain.

Thoroughbred breed Chinese geese still not as popular as in the mixed, it’s all because of the low weight. Mixed breeds have a higher egg production and weight figures are doubled. Thoroughbred White Chinese geese are bred mainly for quality genetic material.