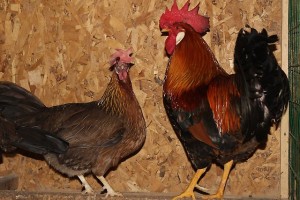 Italian breed hens kuropatchataya refers to meat and egg direction and is considered quite productive compared to other breeds. Live weight of mature chicken – 1,8-2 kg, cock – 2.5 kg. The average number of eggs – 180, a weight of about 60 grams of a white shell.

Externally, the birds have a sufficiently large longish trunk that resembles a triangular shape, with a significant narrowing of the tail part to that, in turn, has a pronounced shift to the dorsal part. The back and the birds chest wide, deep and convex, also have a rather short neck and the same yellow legs. Medium sized head, with a small yellow beak, white earlobes, a falling leaf-shaped comb in chickens, and erect cocks. In Italian kuropchatyh pritulennye chicken liberally to the body wings. Chicken owners of this breed gray with brown basic color, golden mane (sometimes with a dull shade). The wings of birds at the end with a black frame, as the tail feathers of the tail and chest light brown color. Roosters in their own turn light brown head, dorsal and lumbar portions, black with green displays of tail. For Italian breed kuropchatoy presence of white feathers is considered unacceptable, just a different color (not the usual yellow) feet or beak.

Newborn chickens on the day can be determined by sexual species by 85%. Do the chickens have dark brown stain that extend from the corner of the eye to the back of the head, in young males such is not listed, or at least very poorly expressed. Another feature that only the birth of a bird is a female of the same brown stripe that runs without interruption from the head to the back, and in males, this band is interrupted already on the back of his head. The day-old chicks light brown pubescence, and on the dorsal part of one big or two thinner lines.