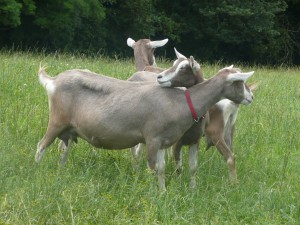 Swiss goat breed called Toggenburgskaya officially presented to the wide range in the 18th century. In the same century the territory of Toggenburg locals finally achieved positive results over many years of breeding robots. Not one local breed of dairy goats has been involved in the creation of more or less perfect breed. When finally it happened, the new breed of goats named after the locality. Later there were more attempts to cross Toggenburgskih goats breeds with other neighboring countries the same way to light a few varieties Toggenburgskih goats: British steaks, brown, noble, and others.

In our corner of the breed has appeared only in the early 20th century and soon became popular.

ÓPo compared with the champions in the weight and growth categories, Saanen goats, Toggenburgskie little less, respectively, productive qualities are also several other indicators. Adult goat reaches 65 kg with height of 45-48 cm at the withers, and the goats are about 70 cm in height and weigh under 60 kg. The head is small, oval face has several flat appearance, ears and tail are of medium size. Ears planted far upright. Limbs of medium length, strong. coat color brown of various shades. On face, ears, edges, tail and feet bright wool, approximate to the white color.

Homeland Toggenburgskih goats – highlands with its specific climate, frequent winds and lots of rain. These conditions affected the animals, goats grow a very long hair, but if the conditions of detention and the climate is more favorable, the hair becomes smooth, thin and shorter. Wool is covered torso, head and limbs of the knees.

To milk has a pleasant taste, you need to follow the diet for Toggenburgskih goats. Some of the feeds may badly affect the taste and smell of milk. But in fact, any milk perfect for making cheese, fat content of about 3.5%. Another advantage of the breed is that goats are milked well and in the winter time, which allows to obtain milk all year round.

The amount of milk also depends on the conditions and quality of feed. Some individuals can produce about 400 kg of milk per lactation period, while others – more than 1,000 kg. The period when the goat is milked 270-300 days. Hornless goats, udder fully developed. Toggenburgskie goats have a high level of adaptation to any terrain.