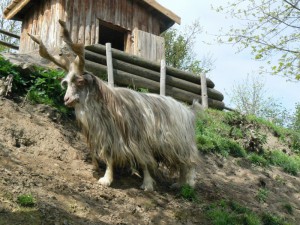 Extraordinarily beautiful breed goats, which glorified Italy, and especially Sicily, where I came from animals. The original appearance of the breed of goats Girgentana received through the horn shape that follows the shape of their wild relatives from Afghanistan. Namely, in those places were carried out so-called wild markhor.

How many years ago, in our time the greatest number of goats breed Girgentana grown in Sicily provinces. In honor of one of the provinces of the breed got its name – Girgenti (now Agrigento Province called). The first thing that catches your eye – a long spiral horns. The goats may reach up to 70 cm in length, are placed away from each other directed upward. Such unusual horns in combination with white coat color make Girgentanskuyu goat favorite of many farmers. Externally bred goats are very similar to wild goats, which are found in Tibet.

The history of the beginning of the breed can be traced back to the 1st millennium BC. Maybe goats on the Italian territory brought the Arabs, even when tochilis medieval warriors at this time. Since that time, the Italians began to breed goats at home to receive their milk, meat and wool.

Girgentanskie goats belong to the moderate type, why do not differ a great live weight. An adult goat can reach 65 kg with height of 85 cm, and a goat – 50 kg and 80 cm at the withers.

The most beautiful are considered goats, fur color which is pure white, you can often find specimens in which brown hair, and the face has black patches. Girgentanskie goats belong to the dairy, they are able to produce about 3 liters of milk per day. For the year it is up to 450 liters that becomes quite a large number among the goats. Milk sold or consumed fresh and processed to manufacture cheese. The milk of these goats is very rich in fat and protein, so it turns out very delicious cheese.

On the outside, the most distinguished Girgentanskih goat horns large corkscrew-shaped. But in general, a small trunk, musculature well developed secondary. Goats are distinguished by the presence of goats, long hair bundle, which resembles a beard. Wool is thick, long, usually white. Reaches maturity at the age of 1.3 years, when the first lead offspring. On average, one Girgentanskaya goat leads 2 kids.