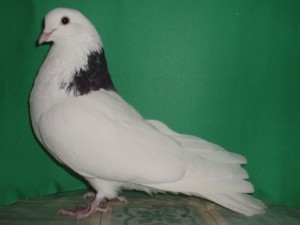 Over grivun breeding species scientists have worked on the territory of the Russian Federation. This breed of pigeons is the most common lines within its homeland. Especially popular birds because of their flying qualities. The very name “grivun” is accompanied by external features. The predominant colors of plumage basic white color, but in the neck following colors appear: black, red or yellow, this is the colored part is called the “mane”. Rarely have the opportunity to meet the dove represented species, having completely white, red, or yellow color crow feathers.

In addition to the main and most popular name exists in birds, and another – “grivuny-Permian.” This title has got pigeons from the area where they were bred, Perm. Currently very popular variety grivunov enjoy in the territory of Sverdlovsk, Chelyabinsk, Kirov, Izhevsk, and Solikamsk. The first stages of the formation of birds began in the second half of the 19th century, towards the end of the 20th century, was built some type representative of the breed, which appears quite resistant characteristics of the exterior, as well as birds from birth has excellent flight qualities.

Exterior view of the representatives of this breed is very smart. Pigeons have the following data: a large chest; the head part is dry; the beak is long enough; eyes large and expressive. Landing at grivunov low, the extremities do not have feathers, the tips of the wings extended, the line length of the wings to the tail. Thanks to the powerful design of the trunk, very hardy birds. The very constitution looks harmoniously and proportionally that improves appearance. Features grivunov also a strong bone system and well-developed muscles, luxuriant plumage that betrays the massiveness of the birds, and the whole picture in general contributes to the good qualities of flight.

Introduced species has always been famous for its own high-flying abilities. Raise poultry fairly easy, as there are several different styles in the flyers. Often you can see how the pigeons circling or when they just fly is not the same as the duration, as well and wingspan. A large flock of great flyers evenly rises up and later birds soar to great heights, and so are able to travel long distances, keeping in one continuous band. Then there are some individuals are able to climb even more, thereby significantly break away from the pack, while others simply get tired and start to gradually fall behind, creating small groups or go to the land alone. Thus, in the course of time, there are fewer flight of pigeons that characterizes their endurance. The most powerful birds in Perm called the “diamond” of their estimated highly enough.

The flight to the celestial expanse representatives grivun breed can hold from five to eight hours, most courageous and persistent (diamond) located at the coast for more than twelve hours. Birds are flying very high, fly so far up that they can not be seen by human eyes.

Experienced fanciers are already familiar with this breed, so they know a few tricks effective training birds. The main rule Activity training process – clear weather, to the flight of pigeons can be seen. Birds are very savvy, within ten days of training, grivuny acquire the necessary form and can truly express themselves in beautiful high-flying. By their own nests birds attached quickly, so they can quickly navigate the area to return home.

The average of Representatives has grivunov body length from 35 cm to 40 cm. The body is very proportional, with neat lines and shapes. In the standing state is noticeable, slightly bowed, delivery. The trunk is located at a low level, only the convex rib cage cell which strongly sticks. The plumage is a silky, and is considered a classic, because there is no extra decoration. Is that on a pure white base color conspicuous different color manes. Looking at the appearance of birds, pigeons lovers immediately understand about what birds have flight characteristics, because it shows the ability of their magnificent poleta.Na currently breed is finally formed, so there are certain characteristics of a genuine representative of the line grivun:

Externally, it can be seen the beautiful main pattern plumage and its features. Predominant colors in shades of white feathers. Near the back of the neck area, you will notice a small speck of different colors, which begins approximately one and a half centimeters below the neck, on continuing on the neck until its middle, closer to the shoulder joint is increased near the neck area, and then covers the entire back often mark similar to the shape triangle, only with less acute angles. Ideally pattern inherent grivunam must be within certain limits, without going over the chest, shoulder area and the dorsal part. Stains feathers in a triangular pattern are different, the most encountered: black, red, yellow, rarely blue color spot should be rich, vivid color.

Proceeding from the fact that it is impossible to keep track of all the reproductive processes in the life of species, there are also some disadvantages among generations of pigeons. For the birds are not inherent in too high delivery, feathered limbs, straight nonvertical desk, a small chest, smaller than the average size of the gray hair in the beak, too short or thick beak, bright eyes, a rigid lid, vagueness in the contours of the figure, the dark claws and very long tail. All of these characteristics are considered defects, but they can only observe the real fancier, since they are quite small.

There are also features such appearance among grivunov that are not allowed. For example, heavy and sloppy body structure, long and feathered limbs, wings are very small, not large and not completely closed, the tail area is closed not to the end and a little reduced, chest sticks out and is not allocated capacity, noticeable highly developed crested, black beak , the complete absence of the mane or irregular shapes compulsory figure, different feathers on the body, wings and tail region. The presented features are considered practically unacceptable and often these pigeons are not allowed to further cross-breeding with other members of the species, so as not to spoil the quality of the exterior is important to form, because of which are so popular grivuny-Permian.