Fennel plant or vegetable, as it is called in the people – pharmacy dill, is a perennial plant that has gained a strong curiosity on the part of farmers. The strange thing in this so-called “dill”, is the fact that the height of its total for the year up to 1 meter. In appearance it resembles dill completely, but the taste is quite different from fennel and is likely something similar to anise.

Useful properties of fennel on the body

Taste the quality of vegetable fennel is not the only reason for such interest in the vegetables. In addition to the taste of fennel is filled with lots of useful human body vitamins, such as vitamin C, carotene and rutin. The use of food promotes the awakening of appetite and improves digestion. I would like to touch on more cooking and add that the food can be taken entirely vegetable – leaves from the cabbage heads up.

Cultivation of fennel in the garden, the main secrets 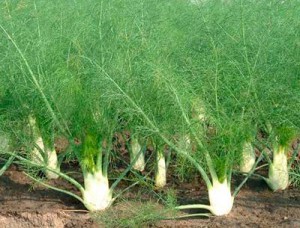 How to grow fennel vegetable in the garden at the cottage. Description of what it looks like and fennel. How to take care and how to water the vegetable

To grow tasty vegetable fennel really need fertile soil, it is desirable – black earth. Of course, before planting a flower bed should be well fertilized to during their growth, fennel could safely take from the soil all the nutrients its growth.

Fertilize the flower bed as follows: – 1 square meter garden is made not more than one bucket of humus or, alternatively, use the peat. Then add about two liters of specially harvested sawdust (correct would be if initially on one bucket of sawdust you add one tablespoon spoon of urea and no more than one standard glass of wood ash). The next addition will be 2 tablespoons nitrophosphate and add half liter cans of slaked lime. It is important to know that for the proper growth and development of fennel, you just have to make some useful fertilizer.

Before starting sowing flower bed to be dug (depth 25 cm) and fully straighten. Growing from seed is recommended in the 20 days of April, after planting fennel urgently need to cover with foil. Under the cover of the fennel must stay one month. Fennel seeds are driven into the ground to a depth of 2 cm. The distance between the rows calculate up to 25 cm. When it became evident precisely where there were weak plants need to carry out a specific decimation. Thus, the distance between plants should be about 11 cm.

After thinning fennel you should conduct a full hilling all plants. During the summer season to do hilling up to 3 times.

I want to draw your attention that the fennel water-loving plant, and it makes us do watering at least once every 5 days. In one square meter of the beds are making up to 15 liters of water. In general, we must start from the outside temperature and the weather.