GeoMedia.TOP / House and Manor / General tips / How to build their own hands rabbitry, photo, diagram 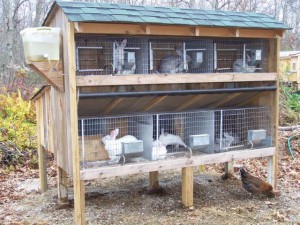 In the spring I decided to start breeding rabbits. I went to market and bought a few rabbits rock gray and white giant. He got up immediately the question of where they will live.

I examined the utility of literature and opted for two-tier rabbitry into four cells. Calculate the size of cells and the amount of material required. Acquired metal pipe frame flat and undulating slate for walls, roofs, wooden planks and galvanized mesh with cells from 16 to 25 mm for the floor, metal corner and began to build their own hands rabbitry.

Construction rabbitry lasted one week. First, using a welding machine welded two-tier framework. Then attach the flat slate on the back and side walls of the rabbitry. She went to the floor all the rabbitry. For ease of maintenance of rabbits one half of the floor area occupied by the board, and the other – net. Isolation of rabbit fall through the grating on the bottom of the pan, which is the extent of pollution removed and cleaned. On the front, the front side there are 4 mesh slate and 4 doors. I had to tinker with awnings and latches.

Between the two cells on each tier made of mesh compartments for hay. The cells are mounted on metal poster roof covered with slate wavy 70 cm tall.. All metal and wooden parts painted with oil paint.

Manufacturers, male and female, contains separately. During the kindling in a cage put a nest box or install a partition with a manhole, dividing cells in half – from the wooden floor turns nested branch. After a month and a half is deposited on rabbits rabbit, immediately separating the females from the males by 4-6 goals in the cell.

From an early age in the same cage, rabbits get used to each other and less fighting. Be sure to carry out the vaccination. Feeding rabbits various grain, forage, hay, vegetables, always in the cell is drinking water. Over time, the expanded population of rabbits, built another two-story rabbitry. For over two years, our family has on his desk a tasty and nutritious meat with high dietary qualities.

Note: Rabbits are characterized by high fertility. During the year of the offspring of one female can produce up to 35 fur skins and about 100 kg of meat.