GeoMedia.TOP / House and Manor / General tips / How to connect a three-phase motor 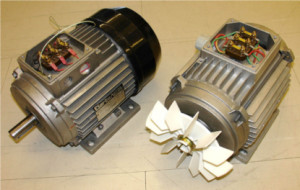 The device is connected to a single-phase three-phase motor network diagram. Three-phase asynchronous motor, how to make yourself

Many summer residents, and owners of gardens themselves are manufactured aggregates for tillage running on electricity. For this often used asynchronous three-phase motors. They are easy on the device, durable in case of proper operation, operate from a conventional single-phase network with starting and operating capacitor.

I was also forced to use an electric motor is a great need. After 11 years of work on cultivators refused petrol engines. It failed to repair it. The question arose: what to do? Digging shovel hard, and I have it decently.

Then I decided to electrify its walk-behind tractor. I put the motor, available, namely 1.1 kW, 900 rev / min., With 100 uF capacitor (he trigger, and work at the same time).

Power has shown several advantages over gasoline. No noise, smoke, stink, do not need gas, do not look for a spark. In addition, the motor can rotate in both directions, so the cultivators I mounted back up, which is very much easier to work. The only drawback – you have to work with cable. I made it easily removable like a regular extension cord.

But the three-phase motor in single-phase, which is in the house, can develop only 50-60% of their power at work in the three-phase network, which, as experience has shown, is not enough, because the cultivator works much more slowly than with petrol engines. I began to look for ways to increase the power of the motor. I had to study literature in electrical engineering, to spend a lot of experiments. Finally I found.

To get the full capacity three-phase motor in single-phase, it is necessary to connect the motor operating the other – the same power (or slightly more), and run dry. The number of revolutions may be different. Both engines have to be connected in a “triangle”, it is a prerequisite. When the engine running idle, a single phase converter in a three-phase AC and supplies it to the working motor, and that develops full power. The two electric motors less power can be used as a converter.

I use two motors 0.6 kW. The converter put at the edge of a bed (not on the tiller), both cable (two-wire and three-wire) joined together with electrical tape. So I plow the land for eight years.