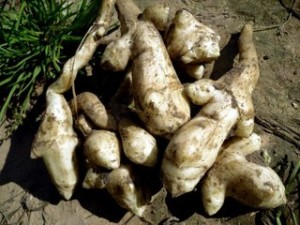 Useful fruit – Jerusalem artichoke (artichoke), growing in the garden, in the country. Terms, photo and description

Seated plant tubers. By the way, it looks like a ginger root, perhaps because of it, landing the first and second grades of plants practically identical. Tubers bigger cut into several pieces, then the result will come about three buds. On the site dug pit depth of 15 cm, 30 cm from each other, can be planted firmly in this case the crop will not be so large as if the plant tubers less. Although the advantages of such planting would still be, you will create a hedge, it does not miss the weeds.

Jerusalem artichoke active period of life is 125 days, this time to water the plants only when planting it in the ground. In the future, the task is pruning the shoots in the month of July. As a result, cropping, artichoke stems should reach half a meter, but not above. Another gardener need to remove blossoms that do not interfere with growing fruit. Vintage Jerusalem artichoke is going to fall. If you want to get a crop in the next season, you can leave the fruit of the land.