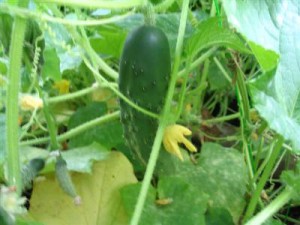 The cause of infertility cucumbers, how to increase the flowering of cucumber. Tips gardener

Several factors can be attributed to causes of barren flowers:

If barren flowers spotted, do not try to remove them – is the male flowers, which are known to pollinate the female. And to female flowers was significantly greater after each try to sixth leaf, Prischepa stem of a plant. This will significantly increase the total amount of the ovaries.

An interesting way to increase the number of female flowers have the option, in which we simply stop watering the beds of cucumbers. At the same time the plant after a while begins to withered, and then we gradually return to the watering. Plants immediately begins more abundantly showered with new flowers. And that new ovary always pulled the right amount of food from the soil, it is recommended after each watering the bed of feed.

I note that it is best to watering and fertilizing to do in the evening only. Then moisture is much better absorbed by the soil, with no steaming.