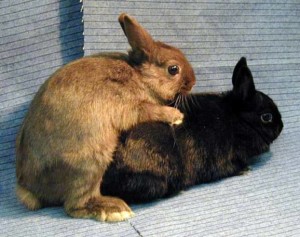 Mating rabbits at home, photos, step by step description, the selection of rabbits to breed

Mating Rabbits for further reproduction in the home need to make less than 6 – 10 days, it allows you to be born almost all rabbits at the same time, making it easier for grooming young. Prior to mating, rabbits are examined, selected from as close as possible to each other by age, taking into account the last pairing.

Generally, rabbits mating takes place under the supervision of the breeder, in the cage of the male placed the female, all foreign objects are removed, even the feeders and drinkers. Anticipating a possible question regarding the choice of place of mating rabbits respond if the male put in a cage for the rabbit, he did not fertilize the female, but if he does, then not immediately, because in unfamiliar conditions in the male instincts are suspended.

On the day of the male fertilizes the two females, one in the morning, the second in the evening. In the summer, in the heat, mating takes place in the early morning and late evening, and in the winter afternoon. To determine that mating has occurred, if you see that they are turned over to the flank and begin to hum and squeak a little, then just need to pick up a female, if you do not pick up, the male mating repeat repeatedly and lose all force, the number of mating recorded. Five days later, the two men again bring together for the control mating, pregnant male rabbit to her will not let. Sometimes, the female simply does not admit to themselves male, then you need to put it to the other.

Some breeders practice group pairing, in which one male is placed a few rabbits. This process results in infertility rabbits, and the depletion of the male, as the pairing can not be controlled. Therefore, this option is not advisable to apply the mating at home.