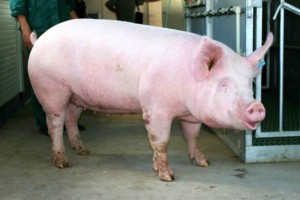 Pigs Ukrainian steppe white varieties of the inherent characteristics of productivity, are meat and greasy or universal direction. As is known, the territory of the southern Ukraine, where the most common pig, quite arid, but such terrain are ideal for variety. It is also known that pets have a high level of resistance, and can rapidly adapt to acclimate. Representatives of this breed do not require special conditions of detention. Also, pigs have the ability to quickly assimilate any food, even those that contain the minimum amount of nutrients. If you compare this with the kind of pure-bred large white pigs, the Ukrainian steppe white rougher and far superior to the habitat on dry areas of southern Ukraine, which is quite a big difference.

Initially, before the plant represented a kind, special purpose has been created. From the new breed needed a high level of adaptability to life in drylands. Because the steppe region of Ukraine are rather favorable for further breeding pigs, it has excellent conditions for the development of pig production, but unfortunately, there was no such pigs that could well fit and feel in these areas. In these regions it conducted many experiments. Local breeders each time trying to somehow develop a pig, but whatever foreign cultural variety did not deliver on dry areas, pets could not adapt and adjust, and local varieties are late-maturing, and this is quite unfavorable disadvantage.

Livestock in the specialty, Mikhail Fedorovich Ivanov, put before breeding varieties of certain characteristics that should have representatives of the future. The target features include: a high level of endurance and productivity, and the main difference was the ability to quickly adapt to the conditions of southern Ukraine. The main task of adaptation, in the end, was not to give an opportunity to adapt to local pigs.

We know that with the help of reproductive crossing is possible to achieve the desired end result, but the process lasts long enough, you will not tell about how going on revival of Ukrainian steppe white varieties. To display represented the breed took only eight years (from 1926 until 1934). Initially, the goal was accomplished by the method of reproductive crossing sows, that lived in the local areas and large white boars species.

Successfully bred Ukrainian variety has high productive qualities. For example, adult males have a live weight of 330-350 kg (the highest result becomes the weight category of 423 kg boars). In turn, the representative of the mature female weighs about 225-260 kg (record holder is 368 kg of live weight). Body length boars averaging 175-190 cm (maximum length 215 cm), and the housing of sows in length – 160-170 (the maximum length of the trunk is 186 cm). One of the advantages of variety is a high level of reproductive capacity in males, as well as multiple pregnancy in women. Practice has shown that a single mother-pig farrowing gives life from twelve to twenty piglets, which is extremely rare. Milking sows, that the truth does not match the number of newborns, only 55-65 kg (rarely found higher number of milking).

Creator presented species – Ivanov MF, after successful results established breed, created a certain procedure is still highly regarded among the rock formation of our country. To a large extent, animal husbandry techniques have become successful undertakings in production. That is, there are certain rules pig breeding that contribute to the outcome, or other characteristics. Thus, consider the known technique.

Firstly, in order to accumulate a sufficient number of young representatives of local population and multiply them, you must perform the following steps:

Secondly, it is necessary to fix heredity local pork representatives of the second generation. To do this, pupils should produce a new generation within a framework of inbreeding or “in itself”. At the new stage should involve only the best pupils, and the new generation of varieties necessarily lend themselves to the strict rejection.

Third, by no related groups should be improved with the best male pigs that were born in the pure breeding.

Fifth, cultivate new young generation should be on high-grade areas of the zone for which was originally bred species.

The founder of the Ukrainian steppe white pig became a male representative named Ascanius I. pet product occurred with the help of a local crossing sows under the number 230 and the boar, which was called Samson 15. resulting in outcomes pet had massive enough and advanced constitution. The body representative reached 186 cm, chest girth behind the shoulder area – 173 cm, body weight becomes 375 kg. All the qualities of boar is good enough, so the second generation was chosen solely on such characteristics. In order to avoid the case of domestic waste pairings in the future that could spoil the highly productive varieties, MF Ivanov developed uterine diversity within families of lines. Thus, a family of boars sows mated with another family. But the basic rule of this crossing is desirable characteristics of future offspring.

Between creating Ukrainian steppe white varieties, livestock brought three separate lines of men’s and representatives of about ten types of newly female representatives. It are these pets were the foundation for the process of testing new varieties. Because, in 1935, a well-known scientist-breeder died and the work on improvement of the representatives of this species in need of further progression, it took “Ukrainian Research Institute of Animal steppe regions named Mikhail Fedorovich Ivanov.” At the institute, the aforementioned breed developed, taken out new and previously laid down quality, diverse line of families and develop a plan for further improvements pets. The main leader of the project was a Soviet scholar “of Agricultural Sciences” – Leonid Kondratievich Crest.

Novo-bred representatives of the Ukrainian steppe white varieties, with the help of exterior characteristics significantly different from the variety of large white pigs. So pets have similar external data: massive body; a strong skeletal system; direct and massive region of the back; large convex chest and abdominal piece; well developed hams; medium-sized powerful legs; small head; slightly curved profile; at the head of the neatly placed big ears that hang heavily over his eyes. The skin of pigs sufficiently elastic and dense. On the skin stratum abundantly covered with bristles whole area of ​​the body. The bristles of medium length, rather thick, hard. Representatives of the Ukrainian steppe white rocks predominantly characterized by a light cream or white color.

The level of formation and productive varieties of data actually inferior to the large white pupils. On average, an adult representative of boars has a weight of 300 to 350 kg, and a spokeswoman for sows – 200-240 kg.

Sows different multiple pregnancy, it is known that the number of kids in the farrowing of piglets is about 10-13. Milkiness reaches 60-90 kg. State studies species showed that the breast fattening, average body weight gain of the baby waver from 700 to 800 grams, and the amount of feed required per kg of gain – 3.5-4.5 feed units. At the age of 180 days (6 months) independent piglets grow and reach a hundred-pound weight.

The research process was attended by pupils that were bred in the territories of plant breeding by name “Sivash”, where fattening took place during the reference years 1969-1971. The results showed that young animals had a body weight of about one hundred kilograms in the age of two months. The average per day pigs gained approximately 700 grams of body weight and per kilogram of body weight gain rate was 4.5 feed units. Meat productivity represented species was one of the highest. Circle area eye muscle becomes approximately 28,5-29,5 cm, width of the bacon -. 2.5-3.0 cm During breeding boars often met, who had even higher rates than the averages. For example, the distant descendants of hogs, which was called Peace 707, had an average daily gain of fattening for the entire range in the areas of 750 grams, while the consumption of feed mixtures of one kilogram of weight gain does not exceed 3.5-3.8 fodder units, and in the semi-annual age pupils It weighed about a hundred kilograms.

Some of the representatives weigh more than 400 kg. For example, a male representative named Fighter of 899, at the age of about two and a half years, had a live weight of 415 kg, and body dimensions were 190 cm long and 182 cm – in the girth of the chest.

Women’s representative of the variety, which is called Culture 460, had 285 kg of live weight, with body length 172 cm Maximum recorded sow fertility -. 12 babies per litter, and milk yield was 76 kg.

Introduced a variety of Ukrainian steppe white pet enjoys fairly high popularity in certain circles of content. The animals used for breeding productive economic, industrial processes crossing. It is this kind of became the basis for breeding new varieties such as Ukrainian – Ukrainian steppe pock-marked, the invention of which involved animal scientist Leonid Kondratievich Comb.

The present diversity of pigs in need of further improvements in meat quality, as well as improving intensity precocity pigs.