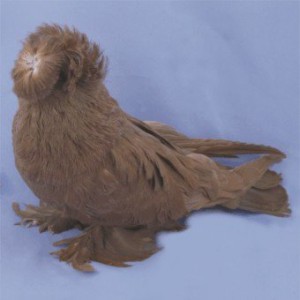 Introduced species of pigeons breed Altenburg Trumpeters, drummers still considered to be withdrawn in 1734, it is mentioned in some sources, but where it is first noticed the breed – is not known. Currently most widespread doves enjoy in the territories of Germany, namely in the pigeon farms in Saxony and Thuringia. In addition to the German regions, the birds are also popular in other countries.

Consider some of the exterior features of the breed presented alterburgskih trumpeters, drummers. Thus, the birds tend to: a large and convex body; body almost completely straight and rather short; legs are short and feathered; small size round head; beautiful eyes inherent creamy, near the eye unusual light-colored feathers, the same as the bird’s beak.

Representatives of this species have a variety of color plumage. Birds am silvery matte palette of dark shades of blue with the original strips, that determines the pigeons as the most beautiful of all color lines breed (like color is found in the wild pigeon) across Altenburg Trumpeters, drummers saturated yellow, rarely also with the presence of bands. Another part of the pigeons has orange, gray, colorful, and other basic color of feathers.

The species stands out due to the high quality summer, and its name comes from the cooing sounds of birds, which can not be confused.