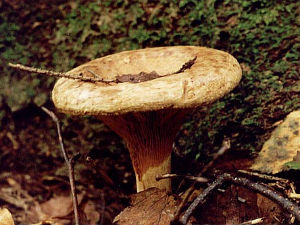 Another poisonous mushroom – it svinushki. Moreover, there are many types svinushek, but described only 8 of them, but in the territory of Russia and neighboring countries often can find only two types – thick and thin svinushki.

Despite the fact that these fungi is considered to be toxic and toxic because they cause autoimmune responses in the human body, carry the radioactive substances that are not degraded during cooking, some people believe that svinushki act on the body as an antibiotic and help reduce swelling. Anyway, it is not scientifically proven and officially these mushrooms are poisonous still.

One of the two known types of svinushek we – Tonkonog svinushki, which may also be called a barn, Solokha or pig’s ear, has a rather large hat, the diameter of which does not exceed 15 cm It is similar to the rest of the toxic species of fungi his hat, at first it is a long, elongated. up, and then it drops lower and even go inside. The edges of the cap does not form a perfect circle, they, on the contrary, wavy, and in some places are scars. The color of hat can be different – from olive green to ocher. If you press your finger on the flesh of the fungus, it will change its color to dark.

Leg svinushki quite a bit lighter than the elite, has a cylindrical shape. By itself, it is small, only 5-6 cm, and a width of about two. Mushroom flesh is dense enough, when the fungus is just beginning to take shape, but the more he matured, the grainier it becomes, especially when small amounts of precipitation.

As mentioned above, you should not eat this mushroom, and even more so given to children because there is no antidote, and the risk that you and your family it will affect negatively it is very large. Take care of yourself!