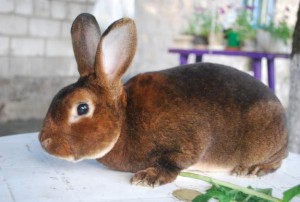 Shorthair breed of rabbits Rex are medium sized body, have short hair, multicolored color. For the first time displayed the view from 1919 to 1924 in France. At the annual Paris exhibition of rabbits in 1924 first introduced Rex breed animals, with those years began to spread in large European countries. For we brought them from Germany, the case was not durable, re-developed, thin bones, muzzle small, oblong, elongated body 40 – 54 cm, chest is small, coverage of 30 – 33 cm, the foot is not wide. Adults weigh 3 – 4.5 kg, rabbits grow slowly, say, in the first month, they weigh 680 g, in two months – 1.68, three – 2.19, and four – 2.32 kg.

Rabbit meat is tender, juicy, after slaughter, the number of products a lot. Females can bring 5 – 6 rabbits, skins after killing baby animals are small and large, colored in black, brown, white, blue. Compared with other kinds of these short hair several times, and in the outer coat of a very thin, the length of 1.8 – 2 cm. The fur is soft, , velvety, thick, glossy. Due to the fact that the hairs are not different in the length of the deck, rabbits look like they have cut. Previously, the fur was considered an example in the production of fur. Most often, the skins are used not painted, leaving its natural color. Previously, by making fur products factory had clippers so pelt Rex were especially popular in a short nap, but with the development of production, the value on the skins fall off.

The longevity of the rabbits of this breed is low, most rabbits are killed at a young age than their peers of other breeds. Due to the characteristics we are not common. The main breed reproducers was Charbahsky experimental Armenian Research Institute of Animal Husbandry and Veterinary, where rabbits bred since 1956. The first few years practiced purebred removal by screening and selection with the directed cultivation of the species. As a result, receive small animals, body length was 40 – 50 cm, chest under the coverage of the blades – 27 – 30 cm and a weight of 2.7 – 3.3 kg, rabbit is not too fertile. In the future, the crossing was carried out using Marder breed, because their weight was 4.8 – 5.3 kg, a massive body, rapidly growing and well get accustomed to the climate of Armenia. Selection work continued for many years, and as a result of hard work, turned the animals to achieve weight 1.2 kg more and increase the birth rate to 7 rabbits rabbits for OKROL. Generally, rabbits are color brown, dark brown, rarely white, blue, beige.