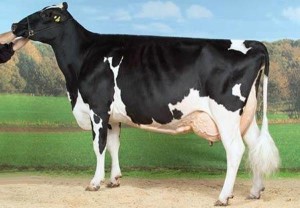 Tagilskoye cows belong to the dairy type. They were bred in the territory of Nizhny Tagil (Russia). This is where local farmers crossed the Ural rock with English and holmogradskimi cows, it happened about a century before last. Later the breed almost no breeding, only occasionally crossed with Dutch cows.

Climatic conditions favorable to Taghilsky cows here and green meadows, rivers, forests, so they have learned to gain weight in a natural environment without any additional power feed. The breed can meet the person are not the same in appearance and construction. This happens due to the fact that the cow Tagil often crossed with other breeds, so kept different characteristics and properties.

In general, the Tagil cows are characterized as follows: a narrow, sagging hips, specific landing hindquarters. Bone well developed, muscular system – medium. The coat is short, very different colors: brown, red, black, monochrome, and with light spots. The udder is well developed, that allows you to receive a cow for a year up to 4000 kg of milk with a fat content of 4%. Record figures for the entire existence of species are becoming 10 000 kg!

Adult Tagil cow weighs about 500 kg, bulls reach a weight of up to 1.2 tons. Since cows can produce up to 50% of the finished beef. The meat turns out not too many, so often used as Tagil cows milk.

Experts are working to improve milk yield and fat content in Tagil cows and build a large amount of meat. There are 13 lines which are known for their high productivity of milk and meat.