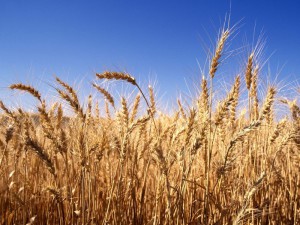 A high value for the yield of spring wheat varieties, namely, soft, hard, solid gain predmestniki. Wheat spring sowing good seed after crops such as sunflower, especially in the area of ​​fertile soil. But we must note that careful collection without loss of seeds to be produced, which then germinate. You can also sow wheat after spring sowing of winter crops and annual grasses. Not recommended for the crops if predmestnikami are perennial herbs. Since seedlings were obtained scarce due to lack of moisture. Well predmestnikom still considered a black pair, because after it accumulates in the soil water and killed most of the weeds. With sufficient irrigation crops can be produced after legumes. In areas with fertile soil is placed after the winter wheat roots.

Fertilization is of paramount importance in the cultivation of spring wheat. It responds poorly to the high portion of feed in the initial stage of active growth. In subsequent phases of development, its need for nitrogen fertilizers doubled. During the formation of the plants, wheat also needs phosphorus additives. At the stage of the formation of ears and seed development, a favorable impact acquire potash fertilization. In the presence of the optimal dose of the soil fertilizer, wheat roots grow and grow, consuming enough water, the most based factors that have a negative impact on its productivity.

During planting and throughout the growing season, as well as cultivation before sowing make nitrogen fertilizer.

Number of fertilizers for the spring sowing wheat depends on the growing conditions. The productivity of this culture is formed by introducing an amount of mineral additives: phosphorus – 50 kilograms of nitrogen – 40 kilograms of potassium – 35 kg per enumeration on the active ingredient.

In areas with warm climates, it is desirable as soon as possible to make the autumn plowing, and then align the soil, especially after the legumes and cereals. Fields clogged with weeds, purified by nine centimeters, and later plowed soil.

Loosening the upper layers of the soil without inverting layers effectively in areas with no weeds. If the fields are overgrown with weeds should be applied subsurface tillage dump of moisture.

Only at first glance wheat cultivation it seems so easy. In fact, this culture, as well as other plants, requires special attention. But we are sure that after this article, you will be much easier to grow this useful herb.