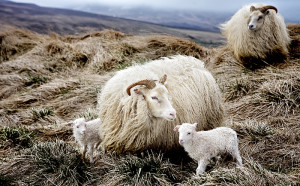 With the advent of the banks of the Vikings in Iceland, were the first pets – Icelandic sheep. Chronologically, it is 9-10 century – the flourishing of the reign of the Vikings, who are constantly brought new trophies from the captured countries. Thus, in the territory of Iceland announced the first sheep, which are called – Iceland. The breed survived to our days, up to the last detail, and all because of the failed attempts to cross the Irish sheep with other breeds. New generations are born weak with poor immunity and genetic diseases, so they are all destroyed. Later, the authorities banned altogether to import some other species of animals, which has led to the fact that the breed has maintained its pure blood. For mating were selected only the most robust and healthy animals, which gave a healthy legacy to the good qualities. Therefore, in today’s time, Icelandic sheep have pretty good performance and still popular on the island.

Sheep are compact, medium size. Adults can reach up to 100 kg. There are varieties of hornless, others distinguished by the presence of small horn rams. Wool is thick 2 versions: the top – a long, straight, helical shape; and lower – short, soft, similar to feathers. Painting can be white, black, brown with different shades of solid color or spotted. Some individuals have a rather interesting and non-uniform color: spots, stripes that resembles a mouflon or a badger. The Icelandic breed is one of the most beautifully colored with natural colors of various shades.

Most sheep are rather complex, they do not like to be in a herd of = of what can happen constant rivalry between individuals. Special hazards may become sheep, they need constant leadership, which is why conflicts occur constantly, in such battles, animals can suffer greatly. As a threat to the leader can see the dog and human, so you should be extremely careful not to cause aggression in the male.

Process okachivaniya takes place immediately after the end of frosts, throughout the spring, summer and autumn. At the time of estrus females Icelandic rocks give a peculiar odor, which attracts the sheep. Sheep on the average results of 2-3 lambs, and has a strong maternal instinct. Up to 7 months of lamb can grow quite strong ram which is able to inseminate a number of females. Lambs are ready for okachivaniyu the age of 1 year.

Long, thick and uniform coat is popular among sheep farmers and wool products manufacturers. Yarn durable and pleasant to the touch, so work with it on hand looms for the manufacture of yarn is very convenient. Most often, the yarn produced in the home, rather than industrial purposes. Since the wool came out quite a bit, even with the whole herd. But in general, all products derived from the Icelandic sheep is completely at odds. The skin is quite thick, so it is used for manufacturing of shoes and coats. Upper thick layer of fur tougher than the bottom, so it is used for the manufacture of carpets. From a soft wool make known Icelandic sweater lopapeysa.

Icelandic sheep are versatile: they can get a tasty meat, high-quality wool, and milk fat. Centuries ago, the Icelandic sheep, used mainly for the production of milk, and later began to be appreciated and taste of the meat. This breed is medium in size, but ripening, at the age of 4 months, the animal can weigh up to 40 kg. In this age of lambs weaned from their mother and graze with the other sheep. With adult Irish sheep is obtained about 45% of meat products.

In spite of a difficult character, Icelandic breed found its admirers worldwide. Second largest number of livestock covers North America, where the number of sheep is practically equal to Iceland.