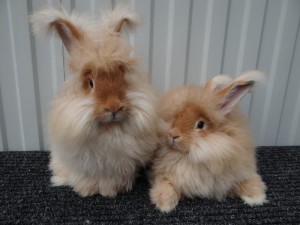 The rabbits of the breed, or how else they are called – Angora brought at the beginning of the 18th century from Turkey and distributed in Western Europe. As to the time of the revolution, they got to us – total number of animals on the farm was small, but in modern times they have almost gone.

Angora Rabbits are small and are renowned for their colorful suits. Performance angora fluff is now practiced and promoted in China (for the year is made up of eight thousand tons), further in the ranking are countries such as France, Czechoslovakia, Poland and Hungary.

Weight adult Angora rabbits are not more than four kilograms. Young rabbits can dial in 4-5 months to 1.7 kg, and up to half a year of their weight is about two kilograms.

The rabbits of this breed have a greater short trunk, large head and small ears. The body is covered with a soft, thin and silky fluff – 90%, is down the length of 15-23 cm Big rabbit year could bring up to 500 grams of down, rabbit – 1.5 kg.