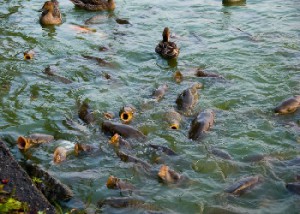 It is known that carp species of fish have sufficiently resistant immune system, but there is a group of diseases to which they have allocated less stability. Among all the various diseases stand out viral and bacterial diseases, it is such a risk should pay more attention. Compared with other ailments presented they are dangerous because they are distributed directly to all representatives and mass can destroy significant amounts of fish. The percentage of deaths is very high indeed, and suffers greatly fisheries.

To learn how to treat the pet, it is first necessary to examine all preventive schemes, as well as unique practices that are right for submission to the fish species. Karpov should be kept in the most favorable conditions for them, as further treatment at the moment is on the stage of development, that is, the complete elimination of all the painful consequences is virtually impossible. The fact is that when the infection gets into a fish family that is developing very quickly, so there is intensive and effective treatment in the deadlines.

Consider the most common diseases of viral and infectious typecasting.
1. Rubella carp, besides the representation of names, this disease is called differently. For example, hemorrhagic septicemia, infectious dropsy, spring viraemia of carp.

This title is typical for the two diseases. The first of them – RNA, which contains the viral disease known as Rhabdovirus carpio, and the other develops in the presence of such bacteria like: Aeromonos and Pseudomonos. The original reasons for the emergence of such diseases have been a variety of viruses, in this way all the moves in the acute or ascites formula, but often presented illness acts with great damage and becomes chronic ulcer or form, this phenomenon is accompanied by a secondary bacterial disease.

Rubella particularly affects yearling yearlings carp species, as well as mature fish species. In addition, the risk of getting there in carp and various hybrid fish. Spring season exposes carp hurt more than any other time of year. This is due to variations in water temperature. The water in the reservoir starts to warm and occasionally heated, this lasts until the end of the summer period. Even when the water temperature drops, and it happens in the first days of autumn, then your risk is significantly reduced.

The most common cause of disease in fish, the fish is infected, or their secretions. Also induced causes of the disease are also subjected to too high a level of fish landings or multiple traumatic causes.

When transporting fish from one climatic region to another may also arise rubella, also badly affects the movement of carp pond in the economic, occur in addition to the cases of the wrong inventory, which is used for fish.

The incubation period lasts from three to thirty days, and it all depends on where the water temperature in the water, because it is the main stimulus.
To distinguish the presence of the virus in the fish, you can use these clinical indicators: fish do not eat anything, or the end result is too much food, decreased activity and energy pets, growth and development is almost completely stopped or greatly slows down.

In most catastrophic stages rubella have presented fish species, the mortality rate is about 90% -95%, and the continuation of the acute form lasts for about two or three weeks. Spotting the disease process can be visually. Throughout the body there are red spots of various shapes, the most they are visible on the lateral and ventral areas and fish fins are fully saturated color red. In addition to these morbid characteristics and other external symptoms appear as exophthalmia, scales and fades noticeably ruffled, the anus is completely inflamed and swells. These fish, which struck rubella, often begin to swim on their sides.

If the symptoms are not cured in the early stages, the disease becomes chronic. The consequences of such a state in carp practically no, they are totally depressed and did not take any feed. In the trunk area and visible traces of blood in his eyes. Inhale and exhale it becomes not that difficult and unbearable, so breathing overly intense and gill areas become dull and necrotic.

After a certain period of time the fish is completely depleted, which also leads to severe nervous, because it is often affected the whole central nervous system.

To properly diagnose and get rid of the disease, be sure to take into account the clinical features, pathological and anatomical characteristics, as well as explore epizootologicheskie data. In addition, the demonstration of virus makes it possible to perform biological analysis.

To carry out preventive actions using quarantine for the new fish, which appeared, as well as complete isolation of those who are already ill with the virus. The most common and effective way to prevent the disease, is also a systematic vaccination.
To cure process used biomitsin, chloramphenicol, chloramphenicol, nitrofuranovye drugs, methylene blue, and others.

2. Smallpox, papillomatosis, or epithelioma
This disease is accompanied by a certain type of DNA that already contains a viral origin. It is he who causes further illness, which is characteristic of the disease, as is the formation of papillae or small growths on the skin pigment.

The risk of contracting this disease affects not only the carp, but them still carp hybrid or representatives, besides carp, bream, ide and many other categories of fish. Often, the disease developed in representatives who are older than two or three years. Statistics showed that in all parts of smallpox ill in the summer or autumn.

Any diseased fish immediately becomes a direct distributor of the disease. One factor that affects the spread of the virus is reduced to the normal health care, that is, support for the pond clean and all vegetation.

As you know, smallpox is one of those ailments that are immediately transformed into chronic. Incubation interval lasts about twelve months. To distinguish the disease represented by using the following clinical parameters: minimum consumption of feed mixtures, fish and lose weight rapidly depleted, growth virtually stops. In areas fins visible outgrowths, which is also formed on the surfaces of the body. The thickness of such growths from 4 mm to 6 mm. First, their appearance unnoticed, but later they extended to all the plots of the body.

Activity For proper diagnosis is necessary to study the underlying causes of clinical parameters and stimuli, as well as characteristics of the epizootic.

Preventive measures should be carried out with a rigid observation standards during the period of fish estivation, disinfection and freezing waters, careful selection of patients representatives of the carp, and quarantine practices for new and more young individuals.
Because of the extremely short lines, the disease turns into a chronic, yet effective and rapid method of treatment of smallpox. At the moment, scientists are exploring all the typical characteristics of the fish immune system, so we hope that soon there is a way to cure the carp in the early stages.

3. Inflammation of the swim bladder carp, which is also called the runway or aerotsistit.
For the appearance of the disease only one pathogen, which is known as myxosporidians that comes directly from the «Sphaerosporidae» family.

Especially prevalent the disease is considered carp, carp and hybrid fish. Also presented varieties, other fish are not suitable for the risk of the disease, even if the live in the same environment with carp, infecting them does not work.

The greatest risk of contracting the summer periods of the year, and the disease is spreading to at least 90% -95% of the fish population. There are no mild forms of the disease, it becomes immediately the acute form, or nearly acute form. If the disease has not been prevented, the coldest time of the year it becomes chronic, leading to non-intensive livestock deaths. The most sensitive to the disease presented yearlings and two-year. As for the adult fish representatives, then they suffer illness less painful, but the parts of the whole process of the disease turns into a chronic form. Infection occurs carp livestock in the range of four to six weeks. Incubation sufficient for one or three months, but the incubation period also depends on the water temperature indicators.

Calculate the disease is possible by means of such clinical signs: the most acute forms of lost appetite and fish almost nothing to eat, in the abdomen, that is closer to the anus, there is a noticeable increase in the volume in which the consequences of impaired coordination of all the propulsion system and are often fish float to the water surface. The most difficult periods lasted for two or three weeks, when a higher percentage of longer die, but among 100%, survive only 3% -5% in practice, though in fact shown that survival is inherent in most of the fish from the population.

If not so acute or chronic disease, the symptoms are expressed in minimal consequences, so if the carp do not die, the parts of the whole can recover.

Affected by inflammation of the swim bladder of fish immediately distinguished from healthy. They comes complete violation of metabolic processes, there is a significant lag in the development and growth of intensity.

To carry out diagnostic measures need to collect all the data, the clinical, histological, pathological and anatomical and epizootologicheskie. All of these statistics will help to conduct diagnostic procedures correctly and efficiently.

For the presented species have not yet established effective extermination of the problem and complete the treatment, there remains only to experiment. But, there are some medications that give minimal chances. These include: biovetin, Biovit, kormogrisin and others, that is made use of methylene blue or feed antibiotics. It would seem likely to survive in the fish actually not, but the minimum number of animals that defeated the disease, acquired a high level of the immune system that ensures greater resistance to various diseases.