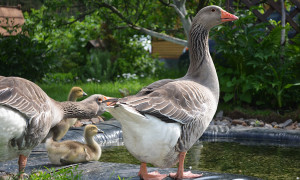 Large gray breed of geese is a relatively new breed of poultry, which is created at the beginning of the last century. Large gray were put through their ancestors and Romenskaya Toulouse geese. With geese collected the best representatives of which have rapidly gain weight and a lot of rush.

Among the rocks there are two types, which differ slightly from each other: Borkowski and Tambov steppe. They are united by the external construction of the body, relatively large and broad head, a medium-sized beak with a blunt end, the neck is quite thick.

The trunk is large, strong, two folds of fat are formed on the belly. Chest forward curved, rounded; flat spin. The wings are big and strong. Feet thick, stable, apart planted far. Feet like beak, a bright red color. The bottom of the stomach and breast white or light gray in color, the rest of the plumage gray.

Large gray geese are mainly used for meat production. Geese are rapidly gaining weight and the period of growing up male can weigh from 7 to 9 kg, and females an average of 7-8 kg, but were recorded as indicators of up to 9 kg. Females are gray geese in the year can carry up to 50 large, oval-shaped eggs.

Females derive about 65-75% of goslings. Goslings are born small and light, but rapidly gaining weight and in 2 months weighing up to 4.5 kg. Good batten any type of feed and do not require the presence of water bodies.