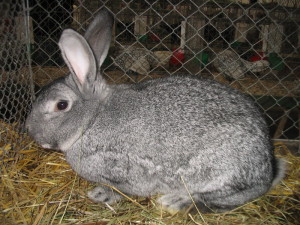 View rabbits called Soviet Chinchilla was received during the period from 1948 to 1963 at the Institute of Scientific rabbit territories farm “Anisovsky” in the Saratov region and “Cherepanovsky” from Novosibirsk. The breed have created a giant white cross and a chinchilla, further work was carried out with the selection and the selection of animals as close as possible to that of the desired breed. Breeders sought to improve the lot of animals, early maturity, rapid adaptation to the climate. Soviet chinchilla (see photo), which was officially recognized in 1963. – In the end, after painstaking work rabbits breed was created.

Soviet Chinchilla Features: small head, ears straight, elongated body, the chest volume, big, back in the form of arches, massive paws. Adults weigh from 5 to 7 kg, body length of 60 – 65 cm, below the breast coverage blades 37 -. 42 cm Young rabbits two months weigh 1.7 kg, three – 2,3 – 2,8 kg. Females are fertile for once bring 7 – 8 rabbits, caring for their offspring, milk. The breed is valued both for meat quality, and for the quality of skin, it is velvety, glossy, glossy silver-color, black wavy stripes are especially characteristic of the sides. Head and neck tint, back, side parts, dark chest, belly, inside of the legs and tail are white with blue highlights. Along the edges of the ears and the top of the tail stretches a dark-colored strip. On the edge of the muzzle eyes framed by a light color on the frontal lobe ash-gray paste. Eyes cherry-brown, there are bluish.

Skins are popular thanks to interesting color, very fluffy, used in the manufacturing of fur products, both in-kind and dye and produce for their valuable fur-bearing animals.