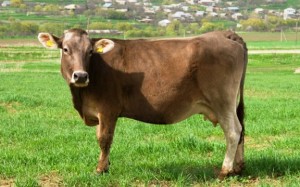 Schwyz breed cows used to be bred in the Swiss mountains, and eventually spread to different corners of the world. They are combined animal milk and meat production.

Later the above, the breed was divided into several types: milk-meat, meat and dairy and milk, each with its own characteristics and individual construction of the body. The breed is bred in Switzerland, is known for strong design, enhanced muscular and big breasts. Provided meat and dairy type, which is more developed muscles, rather loose body, but minimally advanced udder.

The colors of these cows is totally different. Most of this brown suit (there are as light gray and dark brown) in combination with different hair lighter shades visible in the back and groin animals. Bands lighter tones are also observed on the dorsal part of the body, following in the internal cavities of the ears and around the lips. In Schwyz breed dark (in conjunction with black ends), horns and hooves black.

At the end of the century IXX breed is originally from the Swiss mountains was discovered in Russia. Many years before the Soviet time the animals were kept only in large spacious estates and provide better nutrition. Selection methods are not stopped, and have progressed in designated tribal state farms. As a result, some time later, it was created a highly productive, growing its characteristic features and more advanced breed of body weight, which is represented in Russia as a milk-meat type.

Cow weight is an average of 550 kg to 600 kg, and about 800-950 kg Bull. According to the study in the period of lactation, the average annual yield of milk is composed of 3500-4000 kg and fat content is from 3.7% to 3.8%. The taste of the milk is significantly different from the others with its quality. Newborn calves weigh about 33-40 kg, after which the first year of their life can gain about 250 kg of live weight. The ratio of the mass slaughter of mascara to the pre-slaughter weight of the animal is 50-60%. Schwyz breed cows are characterized by their resistance to diseases and the rapid ripeness, which is of no small importance of their qualities.