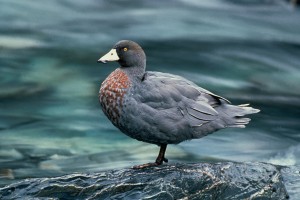 Swedish Blue Duck – very beautiful and productive breed. The first records of the breed date from the early 19th century. During these years, the ducks breed Swedish blue were extended to the territory of Pomerania, which belonged to Sweden. Later, the breed began to actively romp in other European countries. Most ducks liked in Germany, that is where there are the largest number of livestock. At the end of the 19th century the breed and imported to the US mainland. These ducks are considered old-timers in Europe, which are popular to this day.

The breed was created in the harsh climate, so has a good immunity and the ability to adapt quickly. The character of the Swedish ducks calm, balanced, they are very accustomed to his master. The feed is not picky, so eat everything. These features are ideal for countries with cold climates, so many Swedish Nordic breeds of ducks.

The breed belongs to the middle-heavy type. Adult males gain about 4 kg, and females – up to 3 kg. Build toned, muscular. The head is small, oval-shaped. The feathers on the head are dark blue. The beak of medium length, straight, yellow with a dash of green. The tip of a black beak. The rest of the plumage is dark or light gray color with a bluish or silvery sheen. The limbs are short, strong dirty orange with black spots. The wings are big and strong, but it is always pressed against the trunk. For the standards that set the American experts, the wings must be some big white feathers, and the rest are painted in a dark color. But on farms and farms to see these ducks is difficult. The most important thing that had a blue hue, while Swedish duck rightly be called blue. There are also black, silver and speckled Swedish ducks.

Lack of blue Swedish ducks – a slow weight gain. It is necessary to have passed some more time to slaughter rather than for other breeds of ducks. Despite the fact that the breed is slowly gaining weight, feed the blue Swedish ducks should be hard, but they are unpretentious in food. Good grazing ducks and outdoors. If in summer duck will eat a variety of herbs, it is a positive influence on the quality of the meat. If you keep the birds in cramped spaces and rarely let out into the wild, you will gain weight very slowly, and the birds can get sick.

After the duck matures completely possible to carry out the slaughter. Meat obtained fatty, tasty and high quality. Performance eggs average – 120-150 eggs per year. The eggs are small, oval-shaped with a green or blue tint. Character geese suggests to the content in the home. Swedish blue duck calm and very quickly become accustomed to the owner.

The most important criterion for choosing the Swedish blue duck is the state of the feet. The stronger and they are painted in the right color, the more confidence that it is a bird with a good pedigree and good health.