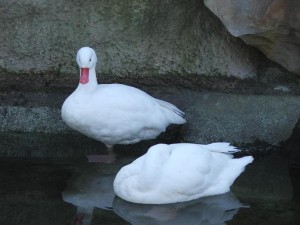 Moscow white breed ducks – the most common type of ducks on the entire territory of Russia and Ukraine. Specialists have created the breed by mixing blood Peking and Khaki Campbell ducks. Created breed in the Russian capital on the farm “Ptichnoe” for the production of quality meat, a large number of eggs. Another positive feature of breed – the ability to function in extreme conditions. In this way, in the middle of the 20th century Moscow was established white duck, and it began to export to all the territory of the former Soviet Union.

Exterior Moscow white duck exterior resembles Beijing: compact construction of the body, deep chest, a small oval head, thin neck. Color pen – white. Beak and limb bright pink hue. Moscow ducks considered heavyweights and reaching up to 4.5 kg of body weight, and the duck drakes 1-2 kg lighter. In good conditions, the weight can be more. At the age of 2 months young weighs up to 3 kg and is ready for slaughter. Ducks ripens a little earlier drakes, so start early rush. Young duck in one cycle can produce 25 eggs.

Oplodotvoritelnost eggs and goslings safety at the level of 90% – a very high percentage among ducks. Because of these indicators breed is very profitable and popular across Russian territory and parts of Europe.

At the bottom it turns out a lot of high-quality meat, which has a pleasant taste and dietary properties. Unlike many ducks in Moscow well build muscle and fat is stored to a lesser extent.

Another plus of the Moscow White duck – it is an opportunity to develop normally and have high productive qualities even in hard frosts. The breed is bred in Russia, so take into account all the peculiarities of the climate. Ducks love to walk, not only in summer but also in winter. They bathe in the snow, drinking cold water and it does not affect the behavior and health of the Moscow ducks.