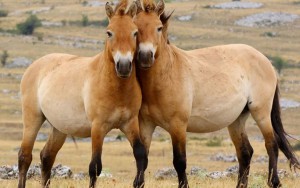 Introduced species of wild Przewalski horse is currently the only one among all kinds of wild horses. In the second half of the 20th century, this breed is actually destroyed (about 1960) in nature, but the unique representatives were found over time that were direct descendants of the Przewalski horses. After finding the last twelve horses of this type, they immediately put to the zoo, where they were shown special care, and then they tried to reproduce as much as possible, to resume again variety and its importance in nature. Worked on horses, scientists of the world community, which, after some time, managed to popualizirovat pets in the reserves, and later imported horses in Mongolia, as well as areas on the half Kyzylkum desert areas. Quite a lot of Przewalski horse breed was considered fully domesticated animals, at least in their home breeding was suspected in the initial stages of breeding. But compared to other instances of the horses showed multiple genetic differences in the reserves. They have 66 chromosomes, while at the same time, domestic horses – 64. And besides, these pets are fairly difficult to obedience train, tame or teach some teams that can easily perform other species.

Consider the exterior characteristics of the species represented. Thus, inherent in animals: a powerful and solid constitution; the head portion is sufficiently large and heavy; cervical area is wide and thick; limbs are strong enough and large; ears of medium size. One of the few features in this breed is not long mane without a bang, it is straight and evenly placed. At the basis of repitsy noticeable small hairs that grow constantly. The middle and side areas slightly elongated, its maximum length can continue until the end of the tail. Externally visible color of the coat, which is often dull yellow shades, not bright orange, but in the abdominal area is a lighter color scheme. The mane and tail of the different dark brown, sometimes it seems that the black coloring. In the center of the mane and the spinal area until the end of the tail stands out a dark “band”, which is also considered to be a special feature of the breed. End legs that are lower than the wrist, it is also characterized by a rather dark shades like brown, but closer to the saturated black palette. In addition, among the represented types of horses, there are individuals with light colored legs, in similar cases, there is no presence of banding or strongly expressed how this phenomenon is called – zebroidnost. Meet the Przewalski horse, whose dark colors only the area of ​​the front pasterns and hocks. Fully saturated black black hoof horn. Light colored areas are also in the circles of the eyes and ears.

Neonates representatives stallions the whole area of ​​the body is completely covered with hairy hairs, mane area is almost negligible, but it immediately noticeable undulation, and tail region is observed vegetation curly hairs.

When it is summer, the wool blanket becomes quite short and very plentiful. Winter time interval exhibits a sufficiently dense woolen cover with long hairs, also from the intense cold weather saves undercoat. During the warmer seasons, coloring the coat becomes more than bright colors, and in winter – darker. Animal housing length is from 225 to 285 cm, height – about 125-155 cm and a body weight, which have pets waver from 200 to 300 kg.