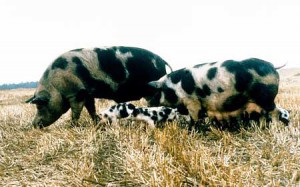 For the type of productive areas, the North Caucasian breed of pig refers to meat and greasy, or, as is called this type of universal pigs. Compared to other species, in the North Caucasus pets explicit structure of the body. Their distinguishing feature is a powerful constitution and proportional part of the body. If we compare with the kind represented by the breed of large white pigs, the North Caucasus are reasonably thin bone system, but more emphasis is on tight and big body breed that is not inherent in other species.

In addition, pets are characterized by such conformation data: a medium-sized, short and wide head, which has a certain bending in the profile, as the head of the erect located (sometimes semi-erect) small ears. In the North Caucasus representatives convex, large chest that is not caught in the blades. The dorsal line is straight, much that passes smoothly into a strong loin. Highly developed area hams, deep, convex and gently go into hock area. Legs representatives are well made, strong, straight and hard hooves on the endings. Externally visible on the body of pigs abundantly covered with stubble field. Bristles have pets thick, soft. The basic color finishes – black with colorful tints (rare orange palette). In the winter season, on the body appears soft undercoat, thanks to some pigs significantly less freezing.

The first representative of the North Caucasian species appeared by reproductive crossing. In the complex process involved local Kuban pets, white, Berkshire and belsnezhnoy korotkouhoy species. Before the advent of the described species in the North Caucasus high popularity enjoyed Kuban pig species. They differed powerful body and relief constitution. The advantages of this species also belongs to their adaptability to the harsh climatic conditions, easily withstand exposure to the pastures, have high levels of fertility, and also have excellent maternal qualities. In practice, it is proved that the mother-pig can bring up completely all kids, without the need for any extra feeding. If we talk about the variety of Cuban representatives, their disadvantage is that the pupils later development, so often the food is much more expensive than the profit that was obtained in the final results. Strictly speaking, this factor caused the creation of a new kind, where you can save all the valuable characteristics of the local pigs, but add enhanced meat data, as well as the possibility of intensive development. The objectives of the crossing also was the fact rapid acclimatization and adaptation. And the last desire of the developer was omnivorous animals. It is known that the local varieties could not eat any feed, especially coarse food additives. So, given all the new features for the new generation of professionals, breeders do research crossing, and already in 1955 the representatives of the North Caucasus have been registered as an independent species of pigs that for their own characteristics related to productivity and meat greasy direction.

Especially different North Caucasian sows that have delightful mothering ability. For example, their fertility becomes 10-15 piglets in one litter, which is a real rarity. Dairy quality maternal and surprise – about 50 kg of milk, and the milk yield is often much higher. Therefore, the fact that all newborn babies survive, the guarantor ceases. Yes and no parent support, in young piglets much chance to survive because of their level of survival. Sows quite calm and friendly. Their maternal quality in any case not peretruzhdaetsya, but rather encouraging North moms.

Placement and distribution of pupils, despite their high productivity, it is surprising. Indeed, except for the territories of the Russian Federation, in fact no one knows about the species represented. The most popular in the country, a variety of uses in the areas of Rostov-on-Don, Volgograd, Krasnodar and Stavropol territories to territories. Recently it showed that pupils in Russia are trying to breed purebred, what animals are transported to different parts of the country. Many start breeding new crosses. The most famous of all the processes of reproductive crossing of the North Caucasus was the case of combining the representative and a representative of Pietrain breed. As a result of this connection came to light a new generation of pigs with improved meat qualities, as well as more intensive ripening. Small crosses are not very well known, as occurs infrequently, but in rare cases such as domestic concerns Don and the Rostov combine. The results of new members, who were born in the aftermath of reproductive crossing, are also impressive. It is known that at an earlier age, the pigs to gain new types of 90-110 kg. The amount of feed per kilogram of body weight consumes minimal and very greasy meat and products have 3-5% fat compartments is less than the original breed animals.

Consider the advantages of the North Caucasus, as well as the reasons for which the breed is appreciated and gladly throw. Thus, representatives of the variety quickly acclimatize and feel good in the harsh climate. Pets quite intensively grow and develop. Possess excellent immune system, through which the animals can withstand all sorts of diseases. North Caucasian mother prone to maternity and well take care of their babies. One factor is that the species is popular in Russia and has in-breed direction (Don and Rostov), ​​which are created based on them, can also be attributed to the prevalence of pets.

Often represented breed is also called as the modern North Caucasian pigs. They are characterized by early maturity, high endurance, resistance to stress and good feeding qualities. Typical color is black with red base color, sometimes there are black-and-white colors of the body. The average number of fertility in the same litter waver from 10 to 15 kids. Milkiness mature feminine representatives – 50-60 kg. A major figure recorded pets and animals in live weight. Live weight of adult boar – 250-400 kg, mature sow weighs, in turn, about 200-260 kg. The pigs at the age of 180-210 days (6-7 months) weigh about 90-110 kg. One kilogram of body weight requires 3.5-4.5 food units. If you cross the North Caucasus representatives with others, you can get a good final results, because pets are perfectly suited for the processes of reproduction of new and improved generations.