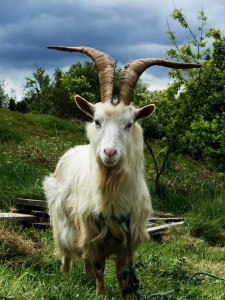 One of the best domestic breeds – White Russian goat, which has an excellent productive qualities. The breed was created a long time, but only because it took place under natural conditions without the intervention of specialists. Even in ancient times, the owners of the goats in search of improving the productive qualities of the animals looking for a good partner for his goats in search of a goat, people can get all the surrounding villages and even cities. That same natural way and led a breed that comes from the North-West and Central regions of Russia. In the later period of mating performed with Swiss and other European breeds of goats is basically just to improve milk production. The latter crosses the most impact on the appearance and productive qualities of Russian White Goats. Goat produces large quantities of milk, but due to the fact that it produced only 8 months, its performance is not too high – about 400-500 liters, a fat content of at least 4%.

Russian White goat – this is the most adapted for the existence of a goat in an environment where the cold winters and hot summers. Large temperature swings are not terrible for goats and how it may not be displayed on the productive capabilities. Such qualities have pleased all farmers who do not want to have problems with other species more vulnerable to suffer from high heat or hard frost. Therefore, in temperate latitudes, this breed is very popular, especially in the north-western regions. Currently only in Russia there are more than 1 million. Goat breed white Russian.

Exterior has some flaws, but it does not affect the productive qualities of Russian White Goats. The breed belongs to the middle-heavy type, so all parts of the body also have a relatively small size. Tulupyev medium size, rounded, slightly sagging belly to the ground, making goats visually slightly heavier than they really are. Chest deep, the head of a small, oval-shaped with a shiny dark eyes, the neck is of medium length. The Russian White goats have horns, which are quite large and have a crescent shape; ears small, directed upwards, slightly pointed. Wool pretty thick and long, but can also be found, and individuals who have a shorter coat. Coat color is usually white, of if there is mixing with other breeds in the blood, the color may be spotty. In addition there are downy layer of hair, which is 20%, which is about 150-200 g

At home, divorce Russian White goats does not make any problems, because they differ a great fecundity. Adult goats can produce in a year, two goats, which will melt quickly on their feet and begin to gradually gain weight, grazing together with other goats on pasture. Performance quality large measure affect the conditions of detention than they are favorable, the greater productive performance. The weight may range from 35 kg to 50 kg, depending mainly on the amount of feed and conditions. The largest representatives of the Russian White breed goats are in the central regions of Russia. Although goats and a small weight, but they differ a great precocity. Youngsters between the ages of 7-8 months can weigh 20 to 30 kg.

Another valuable material that can be obtained from the Russian White goat, is the skin. It is used for the manufacture of luxury leather items, as the skin has excellent quality.

Many breeders use Russian White goat as a material for improving milk production other breeds. Today you can meet the animals of this breed in many breeding plants.