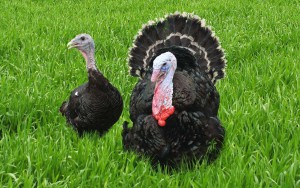 North Caucasian breed turkeys bronze of the same name with the place of origin. Specialists developed turkeys with high productive qualities and the ability to function in extremely hot conditions and a lack of moisture. Because of this North Caucasian breed has spread to Uzbekistan and the entire Caucasus, and later to Europe and Russia. The breed was not only resistant to heat, but also to other weather conditions, so the North Caucasian Bronze turkey is beginning to spread rapidly around the world.

The breed belongs to the middle-heavy type meat and egg direction. Adult turkeys can recruit up to a maximum of 16 kg and turkey almost 2-fold less – 8 kg. Under optimum conditions, supervision, North Caucasian turkey is able to produce up to 75 eggs. Oplodotvoritelnost and the number of newborn turkeys becomes about 75-80%. Turkey quite precocious, well-gaining weight, and in six months old is already possible to carry out the slaughter, because the weight up to 8 kg.