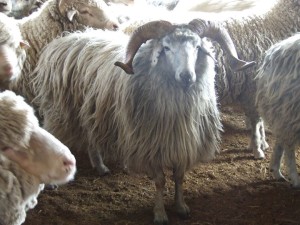 Description, photos, description of sheep for home and industrial breeding

Sokolsky breed sheep old breed that appeared in Ukraine in the village Sokolki, Poltava region. History sokolsky sheep can be tracked right up to the 15th century when retreated Tatar-Mongolian Nabal, a territory populated rusichi from the neighboring Duchy of Lithuania. Settling on new land settlers took with them and their pets, as there were in these areas first sheep.

The entire current territory of Ukraine 15-16 century resisted repeated Tatar-Mongol bulk, some of them also settled on these rich lands. Known Kochubei Mamaea traces its origins from the time of the Golden Horde. Between the new immigrants and old masters constantly clashes occurred because of that and is prepared by mixing the different breeds of sheep. Indeed, in that distant time cattle was considered one of the most valuable trophies. So local sheep gradually mixed with the Tatar and the conclusions of a new breed that has been known for gray astrakhan.

By the 19th century already existed separately sokolsky breed of sheep, which was widespread throughout Ukraine and is very highly regarded. Only the richest and most successful people could afford smushevuyu cap. Beautiful gray with a distinctive sheen automatically makes its possessor lucky in every sense.

So highly prized wool Sokolsky sheep not only in Ukraine but also far beyond its aisles. After the reign of Alexander the peacemaker in the 19th century, all the hats of higher fleet, army and guard of honor of the presidential guard made only from wool Sokolsky and similar characteristics of Karakul sheep.

Sokolsky sheep have an average body composition, weight of adult sheep is not more than 65 kg, a sheep in average weighs 40 kg. The sheep has horns, sheep – hornless. Wool is thick, dark, with an adult, you can get 60% to 50% gray and black smushek. Sometimes lambs are born with a light-gray color, but it is a disadvantage rather than an advantage, because the unusual color is a sign of a genetic disease. These lambs do not survive to adulthood and die very early. On average, these lambs are born 25% of the total, but thanks to the work of experts, this figure had fallen to 5%. Little Lambs with this disorder usually go directly for slaughter for wool. Ewes that are left without lambs can bring up to 60 kg of milk per lactation.

Poltava in ancient times valued Sokolsky wool sheep because the wool is easy to succumb to the properties of the finish. Unfortunately at the present time many of the technologies for the production of woolen items lost. Among them Slobozhanskiy carpets known as kotsy. It is very warm and durable thing, like something between a rug and a blanket. Kotsy principally made from the wool of sheep Sokolsky, because it was considered to be the warmest. Today, similar technology can be found only in the West Ukraine, where the locals still produce a similar thing – skiers only wool-Carpathian mountain sheep.

Wool sheep Sokolsky today is popular in the Ukrainian market. Mass produced clothing and footwear, materials for insulation and other more. Wool is also used for the popular today hendmeyda. Needlework wool used for the manufacture of toys and yarn.

Today, unfortunately, this breed is on the verge of extinction, its account for less than 1%. Sokolsky sheep can be found only in Poltava, Kharkiv and Dnipropetrovsk regions.