GeoMedia.TOP / Our planet / Spiders family / Tarantula, a description of the type spider 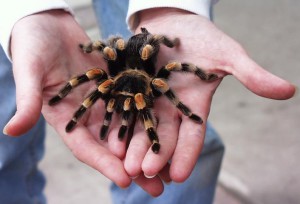 Tarantula species of large spider found in the United States. Insects prefer bush, sparse forests, deserts, steppe zones. tarantula’s body almost completely covered with long fibers of about three millimeters. Color dark (black or gray), orange strips may be present. The size of the spider about four centimeters, feet can be up to seven centimeters. Spider weighs from three to seven grams. Tarantula is not deadly to insects, but some subspecies contain a poison, which has a negative impact on human health.

Insects of the species live in deep burrows. Their depth may reach fifty centimeters. In the wild tarantulas feed on beetles and other insects. Unlike other spider species, tarantula does not build the network. His burrow wrapped thin webs. When the victim is close to a burrow, the spider hears sounds that emit spider thread. It is quite deftly jumps out of the asylum, grabs the victim, pulls into his burrow, which eats “lunch.”

Due to the appearance, size, tarantulas often purchased as pets. They live in terrariums with a tight lid. Must be air holes. At home, let us pet crickets, cockroaches, bread crumbs, food for spiders. Animals eat rare, so do not overfeed them, because such care can negatively affect the health of a spider. They drink water (purified, boiled) water temperature should not exceed twenty degrees.

Although some species of tarantulas are safe, there are insects, poison that can harm you. Therefore, contact with the spiders with extreme caution. Tarantulas also very painful bite.